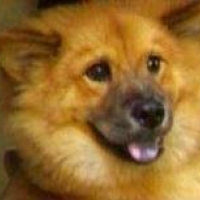 We were at Robinson's Galleria during that time when we saw this huge bear-like dog not the usual chowchow that you can see. And that's how it started.. We looked for a chowchow but all of them are expensive and then when I was walking on my way home I saw two puppies in a cage at the petshop in Antipolo, at first I really like Calee's brother because it looked like a wolf and it is energetic unlike Calee he's so quiet and behave making me think that he'll die sooner or later. I asked the store owner to reserve Calee's brother for me and I'll come back tomorrow but when I went back it's gone someone already bought it so I have no choice but to buy Calee. Days past and I realized that Calee is cute and fun to be with but he was always sick when he was young and we spent a lot of money for his medication, confinement.. and it made me feel that my son is sick now I know the feeling of a mother. =) He's also a smart dog he tend to learn fast and remember things until now like his doctor and some horrible experiences (haha!!). Calee's name came from my last name and my boyfriend's last name which is dimacale and magpili. Until now Calee is so naughty make us think that his crossbreed is a kid, he is not the snobbish type, he always smiles and act so naughty. Well that's all for now!!