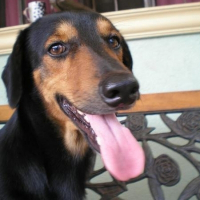 My honey gave me this super "kulit" dog when "Naks", my late dog had passed away last quarter of 2007. I was depressed during the time he entered into our home. We initially called him "Max" that sounds like my former dog that later changed to "Jack" because there was another dog came that we named "Hammer" so they will be our "Jack Hammer" doggies. Everyday, after work..when i saw my dogs rushing to me and smelling their food I bought, then playing w/ me after their meal, all my stress are relieved... they are my stress-buster buddies.. my lil' dose of happiness =D