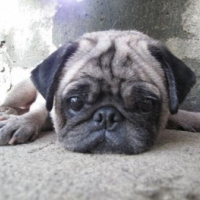 I acquired her two weeks ago...supposedly as a gift for my friend...her former owner, I would say didn't care much for her. She was placed in a cage so small that it only suits her body she don't even have space to turn around what she can do to move was just to stand...her claws can be compared to a Witch...it was really so LONG... She also gave birth already, I don't know how many times but by looking at her nipples I would say...so many times already...Her former owner abused her and more concern of all the puppies she can deliver and that's it... I decided to buy her & for her to get out from that misery... after I left her former home...we went straight to a pet groomer...there she had her 1st class make over...I would say she was very delighted and thankful....It was time to give her to my friend...but something happened that I wasn't able to consider...My friend's family is not use to dogs who barks and howl (well probably she got scared and had separation anxiety during her 1st night at my friend's place)... I just took her home... and now she's ONE of the QUEEN here at home....