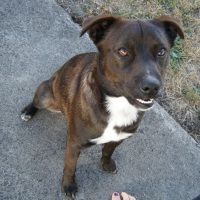 My pet came to us to at a rather unplanned day. My good friend and I had been talking about getting a new puppy to make a family. I dropped him off at work and I went straight to Pets Domain and saw 3 gorgeous Staffie X puppies. 2 boys, 1 girl. I immediately fell in love with one of the boys.. whom was a bit different from the group. His tail had been docked and broken, and his dew claws had been removed. I had been advised that the breeders had planned on making him a fighting dog. I pretty much almost cried in discust, thats when I contacted my friend and said "we're getting a new puppy TODAY". I was so hurt to think someone could do such a thing. So we bought him, and some other people bought the other 2 over the course of that day. And we named him Harli, because the very first day I took him for a walk, a big group of Harley Davidsons drove past, and he sat down and watched them ride past like a little child! So cute!